10: Torvosaurus sp.
The massive european variant dwarfs its North American relative, T. tanneri, in every regard. A
mandible from the late Jurassic Lourinha-Formation in Portugal points out to a skull of 1,58m
in lenght, larger than the one of Tyrannosaurus, and to a total lenght of more than 12m. Other,
fragmentary remains indicate an even larger size of possibly 13 or even 14m. Among them
are the German “Monster von Minden”, and some huge footprints from Switzerland, tough this
remains might in fact belong to other large Jurassic theropods, like Saurophaganax or Allosaurus.
Due to its massive built and robust skull, Torvosaurus was heavy animal, the largest undoubtly
assignable specimen probably exceeding 5t in weight and unconfirmed individuals
maybe approaching 7t .

9: Deltadromaeus agilis
This huge theropod from Cenomanian Africa reached a total lenght of more than 13m,
though it likely didn’t exceed 6t due to its light built. Belonging to the ceratosaurs it is the only
theropod outside tetanura on this list. The paratype (IPHG 1912 VIII) has at times been referred
to the genus Bahariasaurus, which might be synonymous with Deltadromaeus.

8: Chilantaisaurus tashuikouensis
Chilantaisaurus was an enourmous neovenatorid from the late cretaceous of Asia. At 13m in
lenght, it was easily the largest theropod the continent has ever seen. Some of the most impressive
remains are a humerus of more than half a metre in lenght, and a 95cm long tibia.

7: Carcharodontosaurus saharicus
C. saharicus is a large carnosaur from the middle Cretaceous of Africa that was discovered by
Ernst Stromer nearly 100 years ago. First assigned to the genus Megalosaurus, it’s now classified
as the eponymous member a clade of theropod dinosaurs, carcharodontosauridae, together
with some other animals on this list. A massive 12-13m long animal, Carcharodontosaurus saharicus
was among the largest theropods in Cenomanian Africa. Weight estimates for the genus as
high as 15t have been published, for C. saharicus 7t seem a reasonable weight, making it significantly
heavier than an average african bush elephant.

6: Oxalaia quilmoebensis
Oxalaia is a relatively recent discovery. The found fossils belong to a huge spinosaur estimated
as being 12-14m in lenght. Tough probably less massive than some other giant theropods, it is
one of the longest of them all. A distinctive character are the varying morphotypes of teeth
this fish eater posessed, this might be an adaption to a more specialized diet than other
spinosaurs. In South America, were it lived during the Cenomanian period of the middle
Cretaceous, only few other theropods surpassed it in size. To date, it is the second largest
spinosaur known. 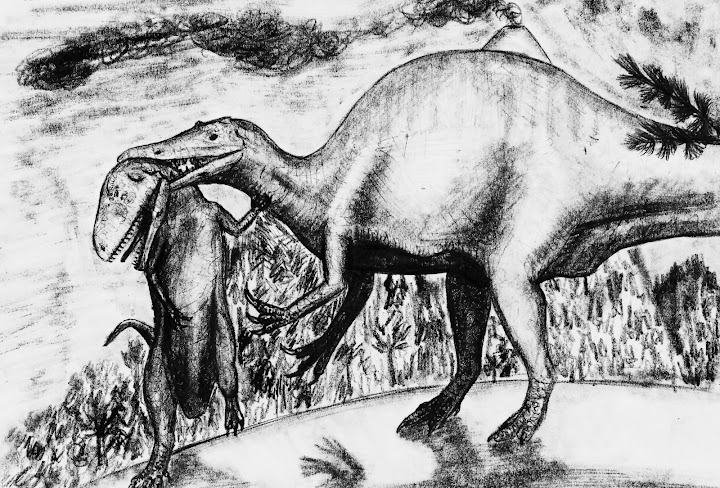 5: Carcharodontosaurus iguidensis
This recently described species of Carcharodontosaurus was probably somewhat larger than C.
saharicus. Its skull has been estimated to be 1,75m long by some sources, making it maybe a
metre longer than it’s smaller relative. At a lenght approaching 14m and a weight of more
than 8t, it was one of the largest carcharodontosaurs, and the second largest theropod in
Cenomanian Africa.

4:Mapusaurus rosae:
Another recent discovery from Cenomanian South America consisted of several individuals
of the new genus and species Mapusaurus rosae. Not only is this the first evidence for a derived
carnosaur hunting in packs, but also a good amount of material of a new huge theropod.
With a 1,8m long skull, a lenght exceeding 13m, maybe even approaching 14m isn’t unlikely.
Furthermore Mapusaurus was a relatively bulky animal of possibly more than 8t in weight.

3: Saurophaganax/Allosaurus maximus:
This huge allosaurid from the upper Jurassic of North America and possibly Europe might in
fact be not more than a really large Allosaurus. A humerus (OMNH 1935) measuring 545 mm
deduces an animal at least 13m long based on a smaller Allosaurus specimen. It is, however
easily possible that overally being larger, its arms were proportionally shorter, as seen in many
large theropods. Earlier estimates have put this genus/species at and even 15m. Those lenghts
are not out of reach considering the abundance of huge sauropods it was specialized in hunting,
the gigantic (70cm+) footprints know from the Jurassic of Switzerland and the “Monster
von Minden”, that was said to resemble Allosaurus, thus probably consisting of two different
animals if one considers the size disparity between one rib, said to be 1,5 times as long as Allosaurus,
and the skull, estimated at not more than 1m. A 13m Saurophaganax likely weighed in
at more than 5,5t, and a 15m specimen could have reached 9t.

2: Giganotosaurus carolinii
This carcharodontosaur from the middle Cretaceous of South America represents the largest
confirmed theropod skull known to date, and one of the largest theropods. Currently, we
know at least two specimens, one of which (MUCPv-95) consists of an isolated dentary
slightly more than 8% larger than the type specimen (MUCPv-Ch1), which already posesses a
skull of 1,75-1,8m in total lenght. When it was found, this made Giganotosaurus the largest
theropod known. Total lenght estimates vary, due to the lack of information on the tail of
this animal. The maximum size was said to be anywhere between 13 and 15m, the latter
basing on a longer, allosaurid tail. The weight was said to be up to 14t, 10t for the paratype
being more reasonable however.

1: Spinosaurus aegyptiacus
At maximum estimates Spinosaurus is the unchallenged king of the theropods, at least in terms
of size. While some estimates as low as 14m have been published, the most widespread and
accepted figure is 16-18m. Such an animal would have weighed at least 11t, probably rather
more. Spinosaurus lived in Africa during the middle Cretaceous. Its habitat was formed by
swamps and rivers, were it hunted for fish using its long, narrow snout. One of its most
prominent features are the elongated neural spines, which are often believed to have formed a
sail. Considering the built of the spines and comparisons with extant animals, a slender hump
or crest serving as a muscle attachment for its large and strong arms, being useful for swimming,
lifting fish and fighting, seems more likely. The accepted total lenght estimate for the
skull of this theropod is 1,75-2m, but there are unconfirmed reports putting it at 2,4m. 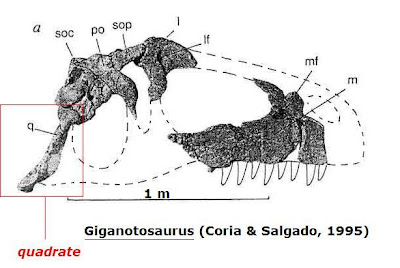